This paper, by Richard McNeil, explores Water Quality Trading (WQT) as a complement to the traditional regulatory approach to reducing water pollution. It examines the theory behind WQT, reviews common practices where trading has been introduced, and identifies principles for effective programs. It presents two Ontario case studies: the South Nation River watershed, where WQT has been a success, and the Lake Simcoe watershed, where WQT is currently being considered. Continue reading →

EBI has updated a key section of its Citizens Guide to Environmental Investigation and Private Prosecution. The online guide now includes the latest provincial and federal objectives, guidelines, and standards for water quality, sediment quality, and soil quality. Continue reading →

In a new report examining the impacts of factory farming, the World Society for the Protection of Animals explains that right-to-farm laws have curtailed the rights of rural residents to be free of agricultural pollution. The authors bolster their arguments with quotes from Greener Pastures: Decentralizing the Regulation of Agricultural Pollution. Continue reading →

A dairy farmer who has been polluting Ontario’s Lake Simcoe has hit the jackpot, winning a grant of $99,950 to construct and maintain a concrete tank to store manure from his 55-cow milking herd. Environment Canada explained that the project will significantly reduce the levels of phosphorus and other nutrients entering the watershed. It didn’t explain why it chose to reward a major polluter with a grant, rather than slapping him with a fine — why, in other words, it administers a system of “polluter gets” rather than “polluter pays.” Continue reading →

This paper explores the development and application of the common-law principle of open justice. For centuries, people used common-law courts to resolve disputes about pollution. The courts were open and accountable. Environmental disputes are now often resolved by regulatory bodies that are less transparent. For example, disputes concerning agricultural pollution are heard by government-appointed right-to-farm boards. Some boards do not release their decisions to the public, and some delete key information regarding the parties and their locations. This lack of transparency makes it difficult for people to make informed decisions about where to live, how to behave, and what to expect. When governments move decisions about the environment from courts to administrative bodies, it is essential that they adopt the principles of transparency and accountability that have long infused the common-law.

Some food consumers, in an effort to contribute to environmental stewardship, are choosing to eat food produced closer to home.  How does this practice stack up, environmentally?

Environment Probe turned 20 this year. To our surprise and delight, we also learned this year that our foundation maintains Canada’s most popular environmental web site. The reason, we suspect, is that the public doesn’t like top-down environmentalism, and we have the field of community-based, market-oriented environmentalism pretty well to ourselves.

This important book builds on earlier work by the same author, Property Rights in the Defence of Nature (1995), which made a strong case that customary common law in the United Kingdom, the United States and Canada has been an effective means of pollution control, where and when it has been allowed to work. As that earlier book showed, however, legislative law, often drawn up on the premise that it would promote economic progress or the public good, has often weakened these customary common law remedies to air and water pollution.

This new book applies the same analytical lens to the narrower issue of air and water pollution originating on farms.

"What does Environment Probe gain by this display of disunity?" demanded one farmer. His anger, voiced in a letter to the Ontario Farmer newspaper, was directed at our public rebuke of the new Ontario ALUS Alliance, a coalition pushing for a provincially funded program that would pay farmers to provide environmentally friendly "alternative land use services." His organization, a local of the National Farmers Union of Ontario, fears that a debate over the program’s merits could jeopardize its public funding.

The new Ontario ALUS Alliance proposes incentives rather than regulations to encourage farmers to protect the environment. The Alliance’s market friendly rhetoric obscures its reliance on tools that are antithetical to markets: taxpayer subsidies and violations of rural residents’ property rights.

As researchers in the field of agri-food studies turn their attention to the institutional mechanisms that enable indus­trial agri-food systems to persist in spite of their ecological contradictions, environmental regulation is likely to become an increasingly important topic.

This paper describes the development of right-to-farm legislation in British Columbia and examines the decisions of the board established to hear complaints about agricultural nuisances.

"Livestock are one of the most significant contributors to today’s most serious environmental problems." That warning, issued by the Food and Agricultural Organization of the United Nations, couldn’t be clearer. Farmers around the globe are polluting the air, degrading the land, and fouling the water on a "massive scale," the FOA charged. "Urgent action is required to remedy the situation."

In her review of Greener Pastures: Decentralizing the Regulation of Agricultural Pollution, Harriet Friedmann is right to insist that not all agricultural pollution can be addressed by restoring rural residents’ rights to challenge agricultural nuisances in court. As Friedmann explains, “to hang the solution to agricultural pollution on courts responding to complaints by neighbours seems wildly inadequate…. [Neighbours] cannot be expected to take responsibility for wider problems that affect whole societies, watersheds, and bioregions.”

A seven-year mystery about the contamination of well-water in Walkerton, Ontario was solved for me in Elizabeth Brubaker’s very first paragraph. I recall good media reports when it happened in 2000 about the livestock operations that were a possible source of the bacteria which caused illness and death to citizens of the town. Yet the livestock operations faded from view as the public inquiry turned the spotlight on government inspections.  Brubaker’s treatise on agricultural pollution begins with a paradoxical finding of the Walkerton Inquiry —- that pollution of wells came from manure which had been spread on farm fields in accordance with provincial regulations.

This paper outlines the provincial laws that exempt  farmers from liability for the nuisances they create. It describes the new standard of "normalcy" by which agricultural practices are often measured and examines the farm practice review boards that have been established to determine whether disputed practices are normal, and thus acceptable.

A new book takes aim at right-to-farm legislation, arguing that relying on the creation of common law through court decisions would result in fewer disputes and would make polluting farmers responsible to their communities.

This book traces the evolution of laws permitting farms to grow larger and to create nuisances — especially odours — that harm their neighbours. It argues for a return to a more decentralized, rights-based regulatory regime in which individuals and communities are empowered to protect themselves from polluting farms.

Published by the University of Toronto’s Centre for Public Management, 2007

END_OF_DOCUMENT_TOKEN_TO_BE_REPLACED

Our water and our air are under siege, and our governments are doing precious little to protect them. Warnings have been sounded by two of Canada’s most prominent environmental watchdogs. Together, they demonstrate the pressing need for a new approach to environmental protection. 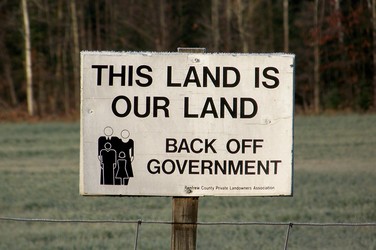